As part of this process, Scottish Natural Heritage, the Scottish government’s own natural heritage advisors, have now taken the decision to reclassify the mountain hare’s status. This decision comes in the light of recent evidence revealing catastrophic mountain hare declines, particularly in areas managed for intensive driven grouse shooting activity.

In amongst the long list of references cited in support of this decision were two key papers: Watson & Wilson 2018 and Massimino et al. 2018. I have written about these papers before (here and here), but the key finding from both papers is that mountain hares have suffered significant declines in recent decades. In some cases these declines have been as great as 99% from levels recorded in the 1950s, while mountain hare populations have shown significant and severe decreases of at least 50% across around one third of their range. These same analyses reported no significant increases anywhere. 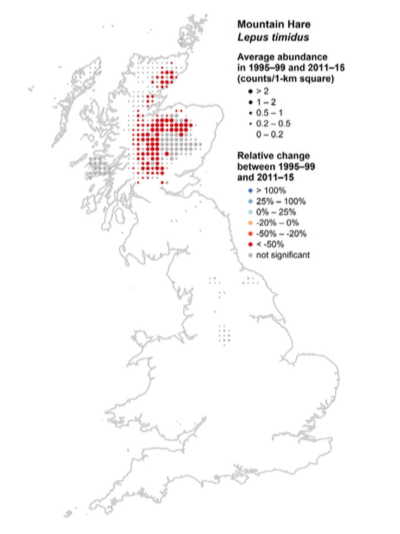 Fig. 1 Average abundances and population trends across the UK range of the mountain hare (Lepus timidus) as reported in Massimino et al. 2018 showing severe declines of at least 50% across 34% of their range.

This most recent SNH report notes that the range occupied by mountain hares in Scotland has remained approximately stable during the period 2007-2018, but that the population (estimated at between 93,600 and 709,300) has decreased. A number of threats are identified as having contributed to this decline, including habitat changes, but only two factors are identified as being of “High importance/impact” and these are: “Hunting” and “Management of Fishing Stocks and Game.”

This assessment chimes with the report by the charity OneKind that identified sport hunting and culls (ostensibly for disease control) as the two main reasons that mountain hares are killed.

Fig. 2 Reasons why mountain hares are killed, based on Kinrade et al. 2008

Mountain hares are already theoretically protected against unsustainable killing by the European Union’s Habitats Directive. However, they are routinely culled on a large scale on many grouse moors, in part because of a belief that doing so protects red grouse against the tick-borne louping ill virus, and despite a lack of any scientific evidence that this approach serves to increase grouse numbers.

Curiously, given that the mountain hare’s reclassification to “unfavourable” status should mean that special conservation action needs to be undertaken to arrest further declines and aid population recovery, the SNH report also appears to note that no conservation measures are needed. That strikes me as odd.

Fig. 3 Extract from SNH report to EU detailing threats to Mountain Hares and the incongruous claim that no conservation measures are needed.

So, what exactly does this reclassification mean? For assessed species, the four key parameters are: range, population, habitat (extent and condition) and future prospects.  Each of these parameters is separately assessed as being in one of the four following conditions: Favourable, Unfavourable-inadequate, Unfavourable-Bad, or Unknown. ‘Unfavourable-Bad’ signifies that a habitat or species is in serious danger of becoming extinct (at least locally) and ‘Unfavourable-Inadequate’ indicates a change in management or policy is required but that the danger of extinction is not so high – at least for now.

In addition, EU Member States are also required to make an overall assessment of the conservation status of each of the assessed habitats and species, with this overall assessment typically reflecting the least favourable of the individual parameter conclusions. In the case of the mountain hare, its range and habitat were both assessed as ‘Favourable’ in this most recent assessment, but because its population is declining and looks set to continue to decline, the status of its population and future prospects were assessed as ‘Unfavourable-Inadequate’, and thus the mountain hare’s overall status has been downgraded to reflect this.

Notably, the range and population parameters are only measured relative to baselines set in 1994, and the current population of mountain hares is considered “approximately equal” to this “Favourable Reference Population”, but because the population is actively declining from this (arguably false – see Fig. 4) baseline, it has had to be reclassified as ‘Unfavourable-Inadequate’ overall.

Fig. 4 Decline in relative abundance of mountain hares in Scotland since 1954 as reported in Watson and Wilson (2018). Note the level when the baseline was set in 1994.

All of this might have been expected to unite conservation organisations behind recent calls for a moratorium on current hare culling practices but predictably, given that the report identifies hunting and management for hunting as the key threats to mountain hares, one supposed conservation organisation has been quick to express skepticism about the reclassification. The Game and Wildlife Conservation Trust (GWCT) has again demonstrated its stance as a greenwashing organisation for the shooting community, releasing a muddled press release that appears to be trying to shift the finger of blame, claiming that instead of hunting “Habitat change resulting from loss of moorland to forestry and increasing predation in areas where no control takes place should be the primary concern”.

GWCT further state that “It is the natural variability of mountain hare numbers and the absence of a national mountain hare count rather than any clear evidence of major declines resulting from hunting, as suggested inaccurately by the RSPB, that has led to the change of status for mountain hares in the report.”

This is simply untrue, as anyone can read for themselves in the SNH report which explicitly identifies hunting as one of two key threats to mountain hares, with management related to hunting the other. It is also sad to see GWCT falsely representing the RSPB, when in fact it is SNH that have made this assessment. Of course, the SNH report does cite peer-reviewed RSPB research amongst the sources which have informed its assessment, but it is by no means only the RSPB that have highlighted these declines, with the Watson and Wilson paper a joint venture between the RSPB and the Centre for Ecology and Hydrology, and the Massimino et al. paper a product of the well-respected British Trust for Ornithology.

The conservation status of threatened species has often been hotly contested, especially when it is linked with hunting (as has happened with the wolf in Sweden). One suspects that the GWCT may be upset not to see their own paper (Hesford et al. 2019) on mountain hares cited amongst the references, but given the inconsistencies and unsupported claims in this paper, perhaps SNH simply considered it to be of minimal use in informing their assessment. Driven grouse shooting apologists will continue to attempt to muddy the water regarding the negative environmental impacts of their sport, but the evidence continues to pile up against them while the pressure on the Scottish Government to rein in this rogue industry grows daily.

Hugh Webster is an independent conservationist and author of The Blue Hare, a fable about mountain hares and the restorative power of wilderness.

2 thoughts on “Mountain Hare status downgraded to unfavourable in the UK – what does this mean?”